A few weeks ago I visited one of London's textile recycling plants, LMB in east London, which collects and sorts clothes for reuse.  A family business, now in its third generation, it started off recycling docking ropes from London's dockyards. 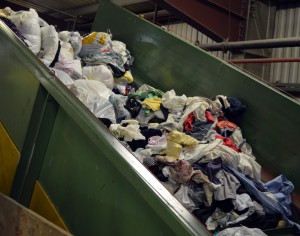 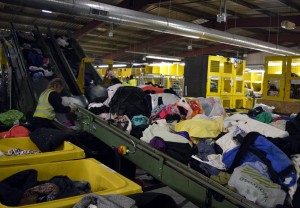 Ross started our tour at the the entrance of the factory where the fleet of 10 vehicles deposits the collected clothes.  A conveyor belt takes the clothing up into the factory where the first group of sorters meet approximately 100,000 garments daily!  The clothes are collected from textile recycling banks and LMB was responsible for putting the first textile recycling bank on public streets in the 1990s.The first sorters remove shoes, electrical waste and bric-a-brac. The 20 tonnes of shoes received each week are sent to west Africa, India or Pakistan where they are sorted, paired and repaired.  Electrical waste has only recently been recognized as a new waste stream, and electrical waste (known as WEEE) goes to Sweep in Kent for recycling.

After the initial sort the garments travel via a conveyor belt into cages which are weight sensitive so that each cage contains the same weight of garments.  The cages were introduced to better monitor the amount of clothing each worker sorts daily, a good worker can process  between 1 to 1 and half tonnes a day.  The clothes are sorted into categories; ladies, men's, children's, household and mixed rag, of which 40% is recycled and 60% is reused.  The top 5% of clothing, especially those still with tags on goes to Eastern Europe, the rest will go to Africa and India. 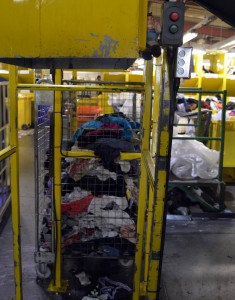 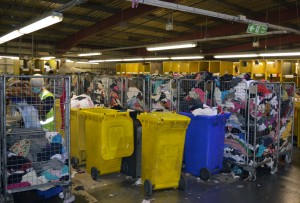 The cotton waste is used as wipers which are sold through their own company.  The synthetic waste is shredded for cars/mattresses or furniture.  Ross explained that there are only 2 or 3 companies still doing this and that they are quite secretive about their processes and customers, most probably due to the stigma attached to using recycling materials as filling for new products.

LMB is well known in Africa for it's quality, so much so that they often encounter counterfeit bales with their logo. Of the 16 African countries they work with Nigeria is the biggest market.  However, they try to keep their customer base as even as possible due to the sometimes unstable or unpredictable nature of working with African countries. The clothing sent to India has to be slashed 4 times as the Indian government restricts it's use and it is only used for recycling into products such as emergency blankets. 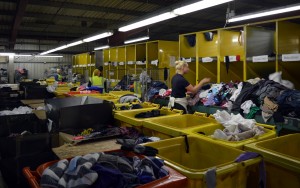 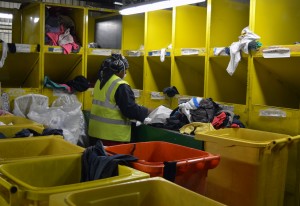 The factory also works with the prison service at HMP Highpoint to sort the clothing into men's, women's and children's so that it only needs to be sorted once in the factory.  The waste cotton for wipers is also cut up in prison.  As sorters have different opinions on the quality of the clothing quality control is needed as keeping the quality consistent is important.  We asked Ross if he ever has end of line unwanted clothing from clothing manufacturers.  While he has spoken to some companies he said this would create problems for his quality as he would have to evenly and discreetly distribute them throughout the bales in keeping with his quality consistency, which would be a time consuming process.  However, some manufacturers would simply rather incinerate their clothing than send it to abroad, for fear of it having a negative effect on their brand. 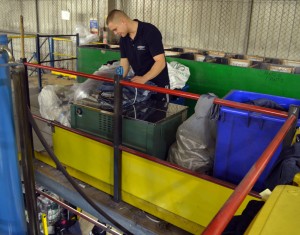 preparing the clothes for packing 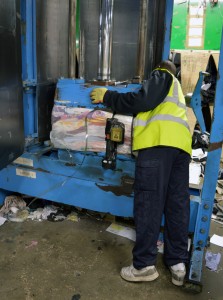 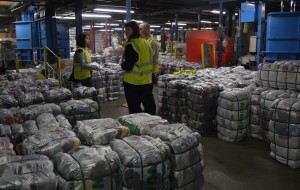 Once all the clothing has been sorted into categories it is packed into 45 kg bales and bar coded with it's contents, making it simple to compile packing lists for each customer.  25 tonnes can be transported on each container lorry, which is equivalent to 540 bales or 82,620 items of clothing, and these are shipped out 2-3 times a week.

That is a lot of unwanted clothes off to a new life!

This entry was posted in Days Out, Sustainability and tagged recycling, textile, clothing, waste on November 30, 2014 by admin. ← Previous Post Next Post →